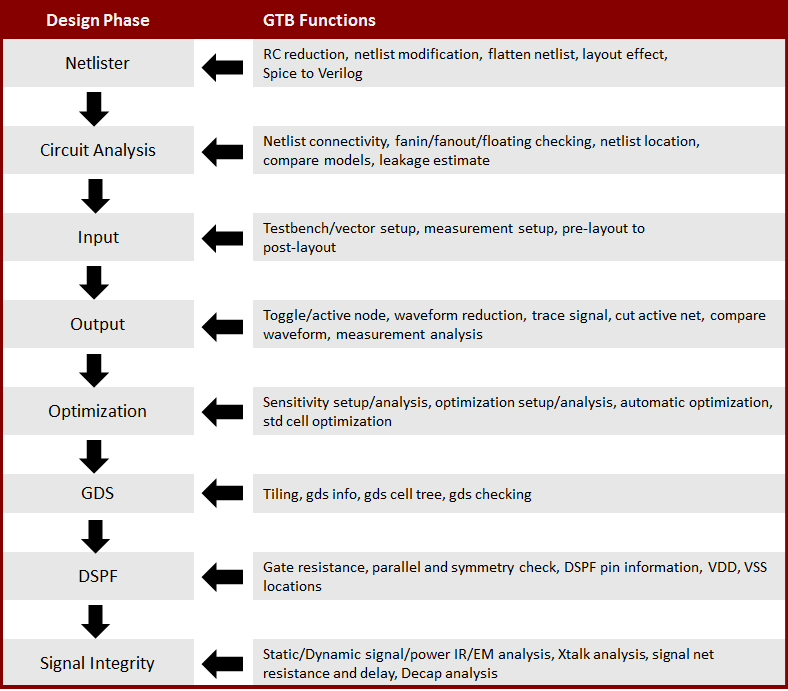 GTB Automating a Variety of Tasks in Custom Design Flow

Easy to Use Intuitive GTB GUI

GTB contains more than 80 different functions for custom circuit design, they can be used at different stages of the design process and they work with different input formats. Here are some of the tool usage by customers.

Designer needs to perform full chip function simulation of a memory test chip. Traditional fast Spice simulator will take 10’s of years to simulate. Using the “Spice to Verilog” function, the designer can convert the CDL netlist to a switch/gate level Verilog netlist. After replacing I/O, memory array and sense amp with vendor and custom Verilog modules. The full chip function simulation can be finished within hours.

Designer needs to deliver CDL netlist of an IP. The netlist needs to be hierarchical but hide the schematic names. Using the “Uniquify netlist” function, the designer can create a new netlist using numbers as cell names. If needed, the cells can be selectively flattened using the function “Flatten cell”

Find All Instance Locations in a Chip

Designer needs to build bitmap for a memory test chip. The test chip has 128 instances of identical memory macro. Using the “LVS netlist location” function, the designer can find the location and rotation of each memory macro from the LVS generated layout netlist. Combined with the bitmap within the macro, the designer can then create the full chip bitmap.

Designer needs to reduce the output file size of post-layout simulation when all nodes are printed out for debugging. Using the “Output Statement Reduction” function, the designer can obtain a set of output statements which only print out one node for each net. This will greatly reduce the output file size, the node names will also be converted to hierarchical names so that they can be easily navigated in waveform display tool. For an output file which contains the waveforms of every node of a post-layout netlist, it can also be reduced. Using the function “Waveform reduction”, the designer can generate a new waveform file which contains the waveform of only one node for each net.

Designer needs to extract the waveform of some signals into PWL voltage statements, so that they can be used for other simulation. Using the function “Waveform to PWL”, designer can convert the selected signal waveforms into PWL voltage sources.

Extract A Block Netlist and Stimuli for Detailed Analysis